The KNTRL9 has three push buttons: one that works as a “shift”-function (to offer extra functionality) and two that work as left/right arrows (for changing MIDI-bank or to go through the channels in Ableton, depending on whether you are using the Ableton script and are pressing shift).

In order to get the best push button experience, I have to choose what type of button I want for the KNTRL9. The choice is between a silicone push button or a tactile push button.

What is a silicone push button?

A silicone push button is a button made from the “rubber-like” material silicone. The spring is provided by the material itself and for that reason lacks the nice click-feedback you get with “normal” buttons. 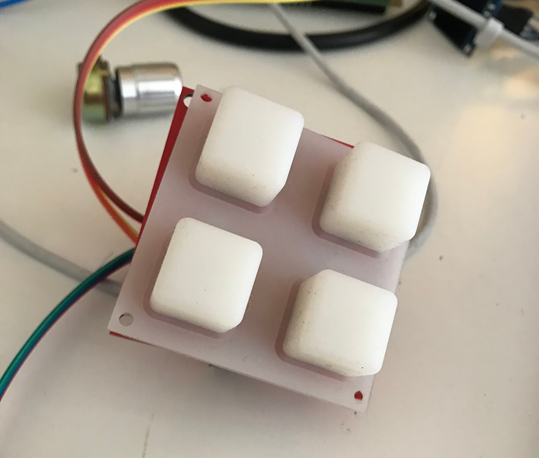 What is a tactile push button?

A tactile push button on the other hand is one that has a metal spring inside that when pressed, clicks the button into a “closed” position, shorting the circuit. 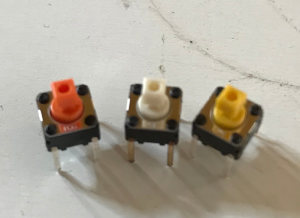 Are there any other options?

Yes, the other options are panel mount buttons and cantilever button spring buttons. Both need to be fixed to the panel, which due to the thick aluminium panel that’s very close to the PCB, means this is not an option.

Which tactile button is the best?

I tested 3 different buttons with each a different operating force (how hard you have to press for it to work):

I went for the 2,88N. The lightest two could unintentionally be pressed (especially the 0,98N one). 2,88N definitely requires some more pressure which makes it very probable that it was an intended push action, but still light enough to make it relatively easy to press. The 4,9n one required too much pressure in my opinion.

I went with buttons from OMRON, a Japanese company with dependances in the EU, because they have a long lifecycle (tested at at least 100,000 presses) and offer a wide range of button caps which I will be using in the prototype (and if they work well and look nice, maybe even in the final product).

Over to you which type of button and degree of pressure do you prefer, and why? Let me know in the comments below.

Subscribe to my blog and stay up to date with my progress.